Congress Pass the Joint! Rally at the U.S.Capitol 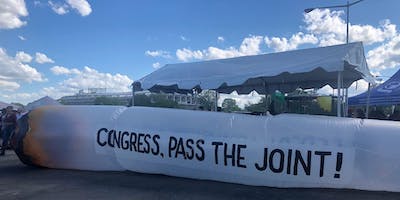 Join us on the East Lawn of the U.S. Capitol at 11:30am on Tuesday, October 8, 2019 to demand Congress pass meaningful cannabis reform legislation! We are calling the demonstration,&rdquo;Congress, Pass the Joint! Rally at the U.S. Capitol.&rdquo; Please join us during your lunch break! We recently got news that the Senate&rsquo;s budget for the District of Columbia still contains the tyrannical Harris Rider. This means that DC&rsquo;s federal budget will go to conference committee in order to hammer out the differences between the House version (which has the Harris Rider removed) and the Senate version of the federal budget. We also have word that House leadership will not seek the removal this rider in conference committee. This means DC is being thrown under the bus again and will likely allow the Harris Rider to remain in the budget for the next year. This also means that both Councilmember Grosso&rsquo;s legalization bill and the Mayor&rsquo;s legalization bill will not be able to move forward for at least another year! WE DON&rsquo;T HAVE TO SIT QUIETLY AND LET CONGRESS PUT OFF MARIJUANA LEGISLATION! But it&rsquo;s not only DC residents getting thrown under the bus. It&rsquo;s EVERYONE IN THE UNITED STATES. More than half the states in the United States have passed laws allowing some form of medical cannabis, but Congress has refused to legislate. The entire West Coast of the U.S. has legalized cannabis, but adults can&rsquo;t legally take their cannabis across state lines. Worse, right now there is an epidemic of toxic THC cartridges plaguing the United States, but instead of passing meaningful legislation to regulate cannabis and cannabis products, Congress has done what they are really good at: nothing. Remember how during alcohol prohibition there used to be stories of people going blind and/or dying because of knock-off alcohol? Sounds like history is repeating itself thanks to congressional inaction. This week the House passed the banking bill, which lays the foundation for legal cannabis businesses, but the Republican-controlled Senate has yet to take it up. Congress will continue to do nothing unless we demand action! What are they waiting for? CONGRESS, PASS THE JOINT! We have Congresswoman Eleanor Holmes Norton (D-DC) confirmed to speak and we will reach out to other members of Congress, the Mayor, and cannabis-friendly DC Councilmembers. Out of respect to the Congresswoman, this will be a NO SMOKING / NO CONSUMPTION demonstration. We do not anticipate any arrests and have applied for permits from the U.S. Capitol Police (a first for DCMJ!). TITLE: CONGRESS, PASS THE JOINT!TIME: 11:30am to 1pm ESTDATE: Tuesday, October 8, 2019LOCATION: East Lawn of the U.S. Capitol, near the intersection of Independence Ave. SE and 1st Street SE.NEAREST METRO: Capitol South (Orange / Blue / Silver Lines)PARKING: On-street is very limited around the Capitol. Cab or Ride Share is best. Stay up to date with DCMJ by signing up for email list @http://dcmj.org/email-signup/