One problem associated with growing marijuana plants is disposing of the roots. They can be analyzed and used as evidence, so I wouldn't simply throw them away in the garden or garbage. Roots and stems should probably be either molded or composted, inside the house, before disposal. Another method could be to burn them up in a wood stove or fireplace, but do it late at night so the neighborhood doesn't smell like marijuana.

Spider mite predators are an effective method of spider mite control; however, there are some problems. The big producers in California are currently shut down due to a virus in the production colonies. Hopefully this will be solved in time for the summer mite season. Another problem is the tendency of spider mites to travel more easily than the predators. Often people will get a vial of spider mite predators and dump most of them in one or two spots. The predators die out after eliminating all easily accessible spider mites. It is better to gently tap a few predators on every infested leaf cluster.

Growing containers with ridges (such as the Classic brand) have an advantage over circular pots. They minimize root circling and maximize lateral root branching. This means that the soil will be more thoroughly digested.

Spaghnum moss is one of the oldest land plants. In some areas, such as bogs, peat moss deposits have been accumulating for thousands of years. The very top layer is living and green, and along with tree moss is used to line decorative hanging baskets. The next layer, a few feet thick, I call "top of the bog" or coarse spaghnum. Of course, peat moss from deeper deposits is much more abundant and easier to buy commercially. Coarse spaghnum has several advantages overpeat moss from deeper deposits: it has more air spaces, it is less acidic and it has natural anti-fungal properties.

Blood meal could be added for vegetative growth, bone meal for blooms, dolomite lime for pH control and some tertiary chemicals.

As I mentioned in a previous article, research reported in the "AVANT GARDENER" magazine indicated that plants grown hydroponically can accept a lower pH than was previously thought possible. Now an article entitled "Does pH really have an effect on nutrition of container- grown plants?", published in the November 1983 issue of "AMERICAN NURSERYMAN" magazine, puts pH in a proper perspective. To quote:

"The definition of pH is the negative log of the activity of hydrogen (H+) and hydroxyl (0H-) ions. A pH of 7 is neutral, below 7 is acidic and above 7 is alkaline. Each unit change on the pH scale reflects a tenfold change in the ion concentrations. . .after 18 years of frustration working with pH...I now believe that it has little to do with the nutrition of a container grown plant."

The author states that in the classic field situation, a lowering of pH increases the availability of micronutrients. His major point seems to be that the nature of typical container media limits the nutritional effect of a change in pH. However, I think some of his other observations are more interesting. To quote from the same article:

"Only with high concentrations of calcium, magnesium, sodium or bicarbonates of these elements, does the pH begin to influence micronutrient nutrition in container grown plants. We have successfully grown plants in container media with pH levels of 3.0. The key was providing a slow-release source of calcium and magnesium so that the plants did not become deficient in these elements."

I once purchased 10 yards of soil composed of river bottom silt (the river flowed through a pine forest) and composted pine sawdust. Naturally,- it was extremely acidic, and could not be neutralized because the compost was constantly releasing acid. Yet the plants grew normally because of the presence of dolomite lime (Ca and Mg). Under normal circumstances (no excessive pine acids for example), an acidic condition would indicate a shortage of calcium and magnesium.

Chemical fertilizers by law must state their NPK (Nitrogen-Phosphorous-Potassium) percentages. Nature has its own laws, however, and in fact plants require other nutrients such as Calcium and Magnesium.

Nitrogen and Phosphorous are acid while potassium, calcium, and magnesium are alkaline. In early stages of plant growth, Nitrogen is most important because it promotes leaf growth.

(If Nitrogen is supplied in the form of Calcium Nitrate, it is more pH neutral.) In the bloom stage, Phosphorous is especially important, while Calcium, Magnesium, and Potassium are also needed in large amounts.

In soil, Ca and Mg are usually supplied through dolomite lime, which is slow-released. In hydroponics, Ca and Mg can be supplied through water-soluble Calcium Hydroxide and Magnesium Oxide. Epsom salts, or Magnesium Sulfate, is added in the case of a Sulphur deficiency. So it is obvious that an NPK fertilizer mixture, such as 5-40-17, will by itself produce an acid condition. Trying to bring up the pH through the addition of more Potassium is ignoring the importance of Ca and Mg and would create other problems as well. To quote from The Advanced Guide To Hydroponics, page 249:

"...if the concentration of one major element is abnormally high, the absorption of other ions may be decreased so severely that deficiencies of certain elements may arise. Potassium and calcium are liable to interfere with each other’s absorption."

For those interested in the organic approach, a pH of 6.5 is the best because micro-organisms operate best in that range. However, in hydroponics or typical container media, acid conditions can prevail with little or no effect on plant growth, provided that enough Calcium and Magnesium are supplied.

Let's say you have four tanks, three for growing and one for water storage. The water would be held in the storage tank at night, and in the daytime the water would irrigate the grow tanks at pre-set intervals. Fish could be grown in the storage tank, and their highly soluble manure waste would provide a 5-1-1 fertilizer. About 5 goldfish would be required per plant, depending on the rate of plant growth. Goldfish prefer water below 72 degrees F., whereas common guppies will breed at 72 degrees or above. I like to keep goldfish and guppies together so that the goldfish can eat the baby guppies.

For the bloom stage," I like to add steamed bone meal. What the fish don't eat will eventually become available through microbiological action. The fish seem to cause the solution to drift acid so I add a little Magnesium Oxide now and then. For trace elements I recommend seaweed extract, 1/4 teaspoon per gallon. Super- thrive is great for vitamin B-l and hormones; it is a little acidic so it should help bring the Magnesium Oxide into solution.

A horizontally mounted heater with suction cups can be used to slightly raise the water temperature. However, if the air temperature is more than 5 degrees cooler than the water, extensive evaporation could result. Bricks with holes could work as a heat sink to create a warm section of the tank.

It is important that this ecosystem not be shocked through a complete water change. There is an automatic water changer which is marketed for aquarium sue, but can just as well be used for a hydroponic system. It siphons off old water, and adds new water through a sprayer connected to a hose and faucet. It is better to change the water in a piecemeal fashion instead of all at once.. This can be accomplished manually as well. Let us say your hydro system has 25 gallons of fertilized water, with an average daily evaporation of one gallon. For example, each day, siphon off two gallons for use on plants that are growing in soil, and add three gallons of aged water.

Lumens are a measure of light intensity visible to the human eye. (See Light and Plant Growth, Philips Technical Library.) Plants are more sensitive to other portions of the light spectrum than that which the human eye can see. The Sylvania Horticultural Lighting Technology Group has produced the following chart: 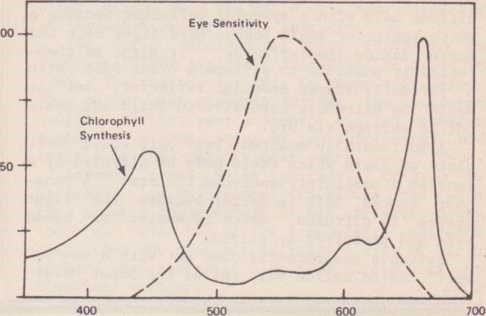