Strain of the week: Gorilla Glue

Gorilla Glue #4 is one of the most popular accidents out there.

Grow your own Gorilla Glue

If there is any strain out there in the world that deserves the recognition it got over the years, it is Gorilla Glue #4. It is light green in color with a strong earthy and sour aroma. Other users and patients have even said they can catch whiffs of coffee and chocolate when opening a bag of this incredible strain. Its scent and flavor profile are all thanks to its parent strains: Chemâ€™s Sister, Sour Dubb, and Chocolate Diesel.

This strain has an interesting upbringing. Joesy Whales was experimenting with crops of Chemâ€™s Sister and Sour Dubb when to his dismay, his crop hermied. He decided to throw the seeds away. His friend, Mardogg, kept a few of the seeds and had the idea to have a go at growing them as well. He grew them in their garden at GG strains in Colorado and ended up with 4 phenotypes. So #4 refers to the fourth 'sibling' of the batch.

He was especially impressed with Gorilla Glue #4 because it was found to be the most potent. It also leaned more towards having Sativa properties compared to its indica and hybrid siblings. Once it made it into competitions, the judges were equally impressed. Gorilla Glue #4 won several first-place awards, like the 2014 Los Angeles Cannabis Cup and the Michigan 2014 Cannabis Cup. It has even won the High Times Jamaican World Cup. There are plenty more awards heaped on this little lady but we simply don't have time to list them all.

GG#4 needs some TLC and growing space to really develop. 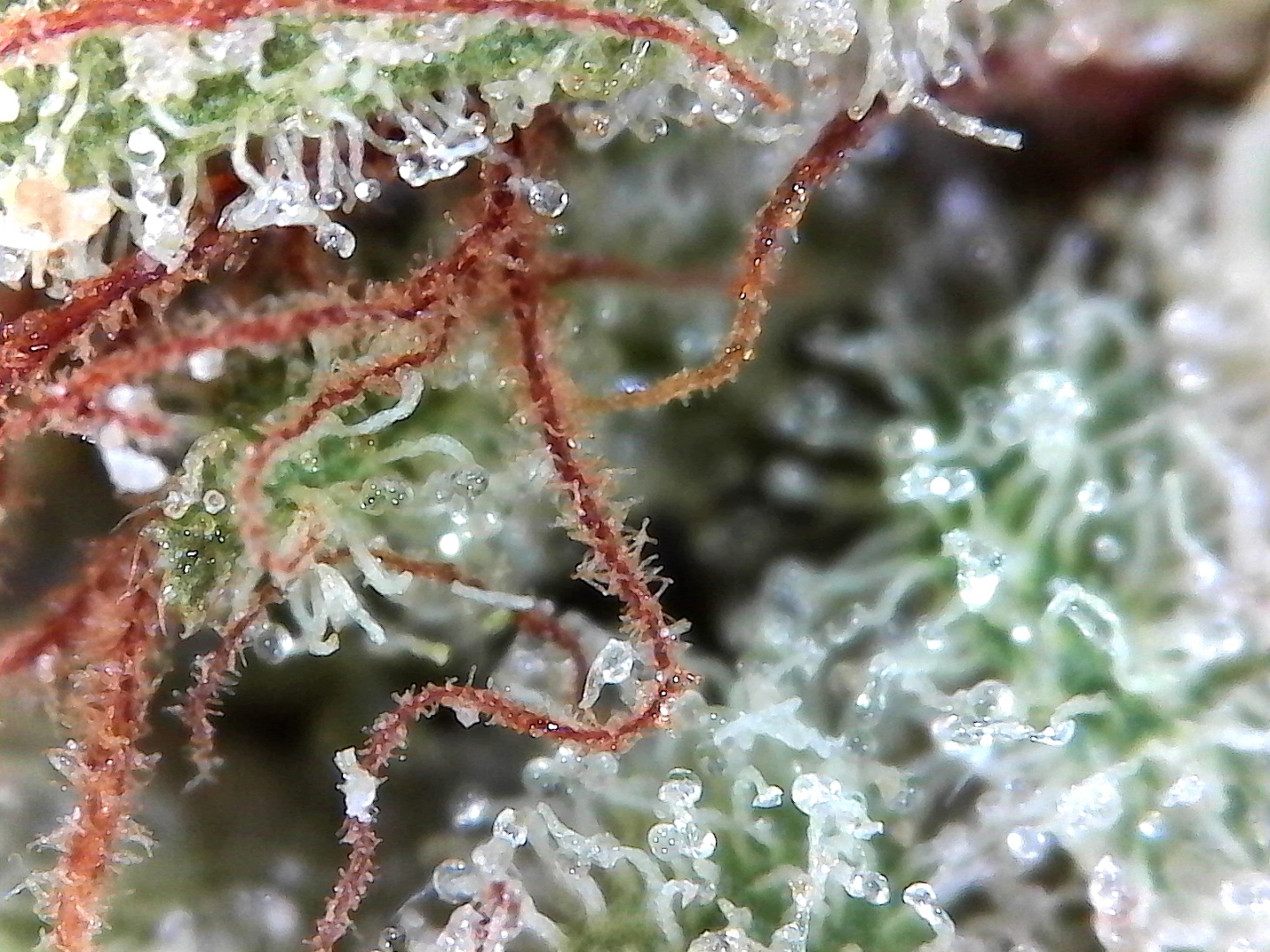 For growers out there, this strain is good for all levels of experience. Just keep in mind, that it is one that will keep you wondering if it will ever stop growing. Having plenty of space to stretch will make all the difference and increase yields significantly. Using the SCROG (screen of green) technique seems to be the most productive.

Gorilla Glue #4 finishes in 9 weeks, or 63 days indoors and in greenhouse set-ups. This lady can handle the outdoors as well, so long as it is grown in warm and sunny environments. Outside, it can finish around the middle of October in the Northern Hemisphere.

Once the plant gets to its full height, one can truly marvel at its stature. It is a very tall plant at 250 cm or 8 feet 2 inches on average. Its yields are also a reward to look forward to. It has moderate to heavy yields of up to 550 grams indoors, and 600 grams per plant outdoors. When trimming, have spare scissors handy, itâ€™s called Gorilla Glue for a reason. The trimmings can get so sticky that it â€œgluesâ€ the scissor blades together!

When it comes to medication, Gorilla Glue #4 does not mess around.

Gorilla Glue #4 might be fine and dandy to grow, but partaking of this strain is another thing entirely. It is known as one of the most potent strains of cannabis in the world. It is 70% sativa with a THC count at about 25-28%, making it quite the contender. Its CBD level is less than 1% so patients donâ€™t usually turn to this strain for chemotherapy or epilepsy.

What it does treat however is symptoms of chronic pain in the form of migraines, arthritis, and back pain. Along with other stressors like depression, insomnia, appetite and nausea. The onset of this strain hits very quickly. It starts with a strong sativa-like sensation in the head, followed by indica-like body high. It is a beautiful blend of both types of high in one strain. One can expect to feel euphoric and relaxed while sinking deeper and deeper into their couch or bean bag.

This strain is not a good idea for those who have a low tolerance or for those new to trying marijuana. They might find themselves too lethargic and even a bit paranoid if they attempt a go at Gorilla Glue #4. For the rest of its patients, this strain is a nice one to have after a long, stressful day. Although sativa dominant, it is a kick back and enjoy yourself type of strain.