IMH is longer, but has more factual errors. Examples from IMH:

Let’s now consider the new Ed Rosenthal book. There is not a whole lot of new material in this book, and most of the references are from the 1970s. The best section is the one on hydroponics, although he does not cover all the systems currently available.

If I were a professor of indoor high-tech growing, I would rate IMH as a C-, and MGH as a C .

Some growers have the problem of what to do with their profits. If too much ‘‘underground” money surfaces in a manner which leaves a paper trail, the IRS could get you even if the narcs are foiled. Banks routinely microfilm all checks; and the feds can force disclosure of these records. Much the same can be said of stocks and most investments. I wouldn’t trust banks or commercial warehouses. Banks are controlled by government, and commercial warehouses can be raided by government. Bearer bonds issued by local governments are usually tax-exempt and anonymous. However, I think government bond investments are morally questionable. They can also be risky; if governments default, what do you repossess?

The single family dwelling is ordinarily an excellent investment. However, if you get busted for growing something illegal in your house or on your real estate, government agents may attempt to confiscate your house and property. Of course, the possibility of detection can be minimized by using electrical generators in an underground shelter. Also, air cleaners are useful for smell and pollution control.

An investment in better equipment, C02, and hydroponics, can increase production without significantly increasing the electrical bill. Gold and silver coins are an excellent investment from a survival viewpoint. You probably won’t make a quick killing, but precious metals are a good conservative investment because they are always worth something. They have been used as a storage of value for thousands of years. Of course, long term storage of food is the most conservative investment. If you have any money left after taking care of your basic and security needs, a trip to Holland can be a good investment!

UHPS or ultra-high pressure sodium is a term I coined to describe a color-corrected high pressure sodium light. This relatively new light is designated by the suffix “DX”. It is only made in 250 watts, by General Electric. The color corrected Optimarc uses a different technology and has a different spectrum which is not as desirable for horticulture; it has an even distribution across the spectrum with a spike in the green. The DX bulbs have more in the favorable orange/red spectrum; however, they must be supplemented with blue light. For most plant species, a deficiency of blue causes stem elongation.

Round reflectors are the most efficient, because a pyramid would bounce the light back and forth in the corners of the hood. However, most rooms are square; which means the corners are the most light deprived. Therefore, a 250 watt UHPS in each corner makes sense. As the plants get taller and approach the budding stage, side lighting can provided from the corners. This allows for more light on bottom leaves, more red at budding, and efficient utilization of the entire room space.

In a typical 10’x 10’ room, I recommend a 1000 watt phosphor halide with 7’ hood in the middle, and four 250 watt UHPS lights in the corners. Start out with the halide alone, and add UHPS when there is at least 3/4’ between the top of the soil and the bottom of the reflector. This means that peak power consumption is only 2000 watt.

It is better to utilize light most efficiently, one reason being that less heat is produced, particularly useful for minimizing ventilation and supplemental C02 loss.

Another relatively new light is the Sylvania MS400 3K. Different phosphors are used to achieve a different spectrum, with more in the horticulturallybeneficial orange/red. The color temperature of this bulb is 3200 Kelvin, which also happens to be excellent for video tape recording.

Unfortunately, a 1000 watt version of the 3K is not currently available. If there is enough demand, perhaps Sylvania will develop such a bulb, and bring it into production. The 3K bulb was tested a couple of years ago by Dr. R.A. Norton, Superintendent and Horticulturist, Northwestern Washington Research and Extension Unit, Washington State University, Mount Vernon Washington. He compared growth rates under the MS400/C/BU and the MS400/3K/BU. The overall average increase with the 3K was found to be 16.2%. In the photo below, the 3K bulb is designated by an “R”. st 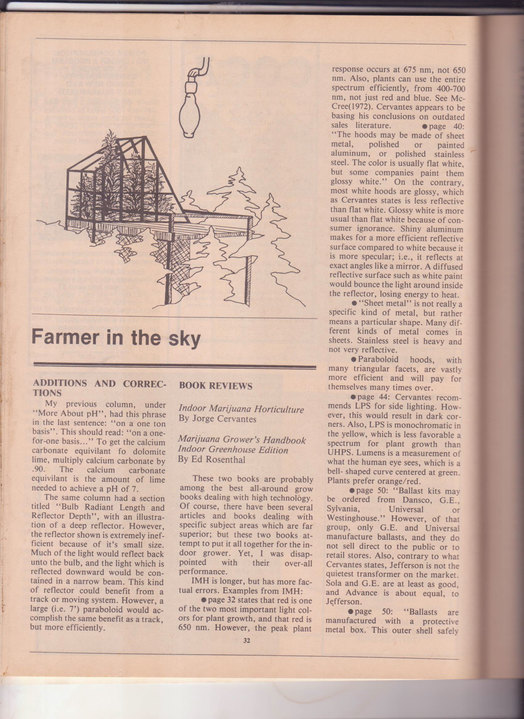 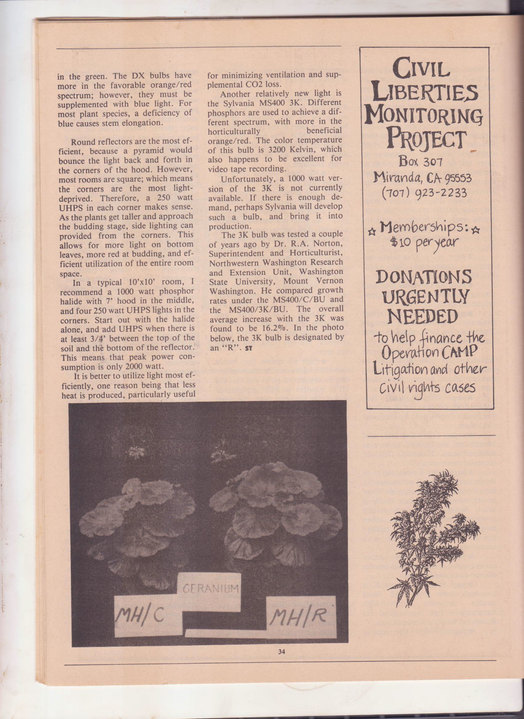