Innovation still occurs in the western world. From the land of Adam Smith, Isaac Newton, and the Beatles, comes a major breakthrough in High Pressure Sodium lamps. GEC limited of England does produce color-corrected HPS bulbs, in 250 and 400 watts. The color-shift is toward the more photosynthetically active orange and red portions of the spectrum. The same company also produces a standard spectrum sodium with a high lumens rating. For example, the 250 watt type produces 32,000 lumens with the standard spectrum, and 22,000 lumens with the color corrected version. Charts 1 and 2 show the difference in spectrum:

Chart 1, called Solarcolour Plus, has the standard spectrum (it is also 10% more efficient for human vision than other brands). 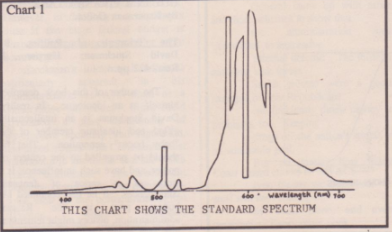 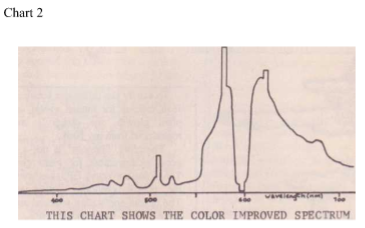 To clarify the difference between the requirements for human vision versus plant growth, see charts 3 and 4 reproduced from my book. 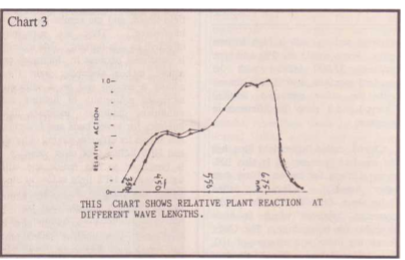 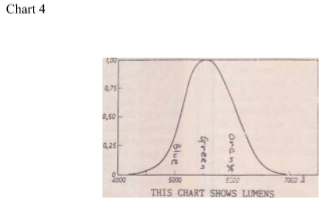 Therefore, "lumens" is not a vefy good measurement for plant growth. The color-corrected HPS has more in the photosynthetically active range. The ballast and socket required are die same as for the standard HPS. The socket should have a 4KV pulse-rating (the 1000 watt requires a 5KV pulserated socket).

The color-corrected HPS has been field-tested, and the results have been impressive. They are especially effective as side-lighting. Side lighting is beneficial because it increases the square inches absorbing light (like adding a second sail on a sailboat); increases uniformity of lighting and minimizes shadows; increases light intensity for lower buds and branches; and allows for efficient mixing of halide and HPS light. (For most varieties it is beneficial to mix halide and HPS light because HPS light is low in blue, which discourages stem elongation). Comer lighting is beneficial because the overhead reflector approximates a circle, while most rooms are square.

To take full advantage of a good lighting set-up, it is necessary to pay attention to the entire growing environment Supplemental CO2 proper fertilization, etc., should be provided. If this is accomplished, the factors of growth work synergistically, like a Gestalt so that the whole is greater than the total of each factor separately.

My previous article dealt with how to build a small grow-box. I recommended adding 2500 parts per million CO2 to the air in the grow- cube. However, I neglected to include the amount of CO2 already in the air, which is more than 325 ppm. The 5’ x 5' x 5’ grow cube contains less than 125 cubic feet of air because of the volume of the pots and lights. To arrive at a rough estimate, I would multiply 125 times .0021 (approximate optimum percentage to add), yielding .26 cubic feet optimum injection. Try setting the flow rate at 15 cfh, CO2 on- time at one minute, CO2 cycle time two hours.

If you use rockwool slabs, I'd recommend drip irrigation. Rockwool does not wick up water from the bottom as well as soil does.

The author of this book describes himself as an ideologue. In reality, David Stockman is an intellectually gifted and idealistic member of the "baby boom" generation. That he should be propelled to the centers of power, and have such an influence, is a story of a series of fantastic coincidences. If he had continued his budget post in the Reagan administration, history might remember him as a tragic hero. Now that he is working on Wall Street, and written a book, he continues to grow in different directions.

This book confirms my worst suspicions about politicians. It surpasses Contract on America in importance, and is a well-documented indictment leveled against U.S. power elites. Like Dorothy seeking the Wizard of Oz, Stockman enters a warp in the time/space continuum to sit at the right hand of Reagan, who is revealed to be a kindly but witless buffoon.

The heart of his argument is that politicians respond to the uninformed dreams and cynical demands of electoral power blocks, not logic and economic science. What Stockman has learned by experience, can be predicted from the behavioral sciences. He gives tribute to the insights of economist Friedrich Hayek. Perhaps if he had also studied Ludwig von Mises instead of pursuing graduate studies in theology, his understanding would have come sooner and more completely. Despite his accolades for Austrian Economics, his viewpoint is more influenced by the principles of accounting. For this reason, he has difficulty seeing the forest from the trees. It is true that the demands of welfare democracy have pushed the government budget deeply into red ink. However, in the long run it matters little if the huge federal budget is financed through more taxes or more borrowing.

Stockman's intellectual deficit is particularly apparent in his characterization of Ayn Rand as a conservative intellectual. Since Rand advocated a vast curtailment of government spending and regulation, and urged a break with Christian/altruist tradition, it is fair to say that she was a radical intellectual. His assessment probably stems from the popular bipolar view of the political/ideological spectrum, which considers libertarianism (i.e., liberalism) to be a subgrouping within the conservative camp. In reality, there are libertarian aspects to both "left" and "right".

Stockman wanted to cut the budget across the board. He failed because politicians can't agree on what is to be cut, and in order to reach a consensus very little is cut. Right-wing Republicans are non-libertarian in their support for big budgets for the military and drug-enforcement agencies. Had he written his book a little later, he would have been able to comment on the recent (unconstitutional) merger of these two bureaucracies. Here's a good quote (pp. 141-142):

"Justice's budget would grow and grow as the Attorney
General came up with more and more schemes to show that
the administration was 'committed' to aggressive
'internal defense'. The thirteen anti-drug task forces
Smith created were a good example of how Republicans
can fecklessly throw money at problems, too. Keeping
drugs off the nation's streets is an admirable goal.
But no matter how many Coast Guard cutters or AWACS-
type planes we deployed, the stuff still kept coming in,
by boat, plane, and even parachutist Every other week .
Smith seemed to be off at some warehouse surrounded by
German shepherds and big bales of pot But the inexorable
bottom line was that over four years the street
price of the stuff never changed significantly."

I agree with Stockman that his rhetoric is often nearly "Churchillian". Stockman can be compared with Churchill in more ways than one. But unlike Churchill, he calls for almost revolutionary economic changes. In this regard, Stockman might also be compared with another failed near- revolutionary, Kerensky, who led Russia after the czar but before the Bolshevik takeover. Stockman would do well to put more stock in his Libertarian leanings. If a mature democracy cannot tolerate the free market, and the unleashing of the State depletes human rights and economics, then a reasonable person ought to question the system itself.

The economy does tend to worsen as we approach total statism. However, economic hard times makes the average person angry; so the government tries to divert attention from its own incompetence, and enrich public coffers, by conquering and plundering other countries and/or internal scapegoats.

The historical parallels are ominous.