The search for knowledge is never ending. Most of us learn more as time passes. Reporting every 3 months on new technology is not easy. My later columns therefore are the most accurate.

Steamed bone meal dissolves more readily than the raw kind. Most bone meal sold today is a mixture of steamed and raw. It is still possible to get pure steamed bone meal from Mexico or mainland China. Bone meal from crab and shrimp shells is usually steamed, plus it contains many trace elements.

For those who are integrating aquaculture and hydroponics, use bottom feeding fish, to clean up what the other fish didn’t get. Snails are also useful, they eat algae along the sides of the tank.

If you have earthworms in your hydroponic plant troughs, they will crawl to the top of the grow tanks in search of food after the lights are out. Worms love rabbit turds placed on the rocks. You might mix bone meal with the turds. These are a couple of easy ways to increase plant food during peak growing periods.

The mother plant(s) hormone level should be equivalent to that of a plant about to bud. This is attained by growing the plant(s) a sufficient length of time at 16 hours a day. The exact length of time required depends on the genetics of the plant strain being used.

If growing your bud plantlets in containers, the containers should be small (one gallon or less is usual). A couple hundred plants under a 7’ hood can mean a lot of manual watering. If you are sure you will never use hydroponics, drip irrigation is a good investment. An individual spaghetti-like emitter goes to each plant. Ring emitters are best. If you are using a pump in your system, place it below the elevation of the emitters.

If you might use hydroponics later, trough watering makes the most sense. Simply build wood troughs and line them with heavy 12 mil plastic. Place the containers in the troughs and pump the water from a five gallon bucket into each trough. For water that does not get absorbed through wick action, simply pump out back into the five gallon bucket. Once the troughs are made, use then for hydroponics when you are ready to take that step.

It should not be necessary to prune the side branches of your bud plantlets unless they grow exceptionally fast or if they are grown for a long time. Do not clip all the way to the main stem when pruning unless you are clipping the bottom branches. The very bottom branches are less efficient because they must reach a longer distance to get an equal amount of light. The top or apical shoot should not be pruned.

Fifteen or 20 ampere breakers are required for 30 or 50 amp, 240 volt circuito that power your lights and fans. Because of their smaller wire size, a short may not cause enough current draw to trip the larger breakers. This could result in a fire. A sub-panel breaker box should be used to split a 30 or 50 amp circuit among several appliances.

Sometimes 1500 watt halides are sold and used with regular open-bottom reflectors. Bulb manufacturers require enclosed reflectors with 1500 watt bulbs for a very good reason. If the outer glass shell breaks, there is usually an explosive. This does not usually happen with lower wattages.

Universal ballasts specify a red lamp (hot) wire. Be careful when mixing components from different manufacturers. The National Electrical Code exists to avoid these sorts of difficulties; it should be followed whenever possible.

The company in the above example does not pretend to have a United Laboratories (UL) listing. Another company, with even a worse design, is claiming to be UL approved. If you bought a light and the halide shop said it was UL approved, you know you were nicked if:

If your unit fits any of the above four criteria, it is not UL approved. The UL stamp may be on the ballast enclosure, but the original unit has been modified. UL listed fixtures have been around for a long time. So far, they all have the ballast attached directly on top of the socket and reflector. This is extremely cumbersome because of the extra vertical space occupied by the ballast, and its weight which must be suspended from the ceiling. One hopes for progress in this exciting field.

If your house burns down, your fire insurance maybe voided if you were using improperly designed electrical assemblies.

Phosphor halide bulbs, as well as HPS bulbs, radiate light from their entire length. Thus it is more important to have a deep reflector if downward radiation is desired.

The primary nutrients are nitrogen (N-usually acidic), Phosphorus (P-acidic) and potassium (K- -alkaline). The secondary nutrients are Calcium (Ca) and Magnesium (Mg), which are both alkaline. Calcium has a neutral after chemical combination with acetic acid. The mix is more soluble also. However, it is easier to use Ca and Mg as a method of pH control. NPK is usually sold without significant amounts of Ca and Mg. The later are usually supplied by dolomite lime in the soil, and because different water sources have different levels of Calcium. Dolomite lime is slow release and cannot readily be used in hydroponics. Soluble NPK fertilizers may react with the dolomite and cause acid conditions. The ideal pH for maximum nutrient uptake in a mineral soil or hydroponics is normally 5.8-6.8. Organic soil should start out one half point more acid because nitric acids are used up first, while the dolomite continues to break down.

Soluble N-P-K fertilizers usually state on the package something like, “Potential acidity equivalent to X pounds calcium carbonate per ton.” Let us suppose x to be 412. Then divide 412 by 2000 lbs. (1 ton). The resulting figure is .206, which indicates the fraction of a pound of calcium carbonate per pound of N-P-K.

In this example, the ratio is about 10 parts N- P-K to 1 part Ca oxide. The actual amounts used depend on the growth rate and frequency of application. Magnesium oxide is about as basic as calcium oxide. It can be substituted for calcium oxide on a one ton basis, in a ratio of 2.5 parts Ca to 1 part Mg.

Growers in remote rural areas with electrical generators should realize that ordinary wire configurations emit electromagnetic radiation. This can be detected by low flying narc equipped airplanes. To avoid detection, I have heard that high ampere coaxial cable is effective. Make sure that the wire is thick enough to avoid overheating. Supplemental oxygen would be required to sustain combustion and respiration in a sealed greenhouse which received supplemental carbon dioxide from engine exhaust. Also, carbon monoxide filters would be an added worry. It would be easier to draw air from outside to supply the oxygen required for combustion in the generator engine.

Electrostatically and mechanically filtered air could be piped into the engine, with the exhaust pipe going directly to the outside. The engine room in this case would be considered a “hot” room in the event of nuclear war.

Alcohol engines produce undesirable carbon monoxide. If alcohol combustion were used in an efficient burner, carbon monoxide could be minimized. Its other by-products are the same as propane, which as Bushwell points out are carbon dioxide, heat and water.

I believe he neglects to specify the dangers of carbon monoxide generation by propane combustion. Also, without adequate ventilation or other source of oxygen, a combustion system would rapidly deplete the oxygen, thus producing more carbon monoxide. Alcohol is a renewable resource and it is easier to handle than propane because no pressurized cylinders are required. Mathewson (Alcohol Fuel, 1980, page 23) states that pure alcohol fuels are extremely “clean burning”.

Of course, ideal combustion never occurs in a perfectly adjusted engine. Perpetual motion machines won’t work because no machine or organism is perfect. This is why the plants in your grow room would not be able to produce enough oxygen for the combustion of an engine, large enough to power a generator, large enough to run your grow lights. Air from the outside can be used to provide oxygen for combustion, however, at least an equal volume of air must be vented out.

The advantage of the latter method is carbon dioxide as a byproduct of combustion. The odor from the grow room may still be a problem. Venting the grow room exhaust up a chimney does not solve the problem. As the exhausted air cools, it will stop rising; prevailing winds may carry much of it to ground level a block or so away.

Optimum odor and infra-red security can best be achieved with a closed loop system. This could be done with combustion systems, but would require the addition of oxygen supplementation and could be dangerous. A closed system is achieved by using bottled carbon dioxide, which does not burn up oxygen, or generate heat, water and carbon monoxide. As Dr. Louis Albright pointed out inAmerican Nurseryman, January 1985:

“High humidity, especially during late afternoon when the greenhouse is cooling, has been known for many years to cause disease problems. Recently, as greenhouse air leaks have been tightened to save energy, high humidity has caused inadequate transpiration, resulting in poor plant quality.”

If large, efficient reflectors are used, the lights are not apt to generate too much heat except in the summer. Specially adapted air conditioners can control temperature and humidity without venting. The added carbon dioxide is not wasted. If venting cannot be avoided, it should be minimized by using a thermostat, which is integrated with a cycle timer so that the carbon dioxide turns on right after the exhaust fan shuts off.

You may wish to spray fertilized water on the leaves just before the carbon dioxide is injected. If the plants have developed large flowers, spray only the fan leaves to avoid bud mold. The fertilizer can be absorbed only in the presence of water. After the leaves have dried, re-wetting them will activate any remaining fertilizer. 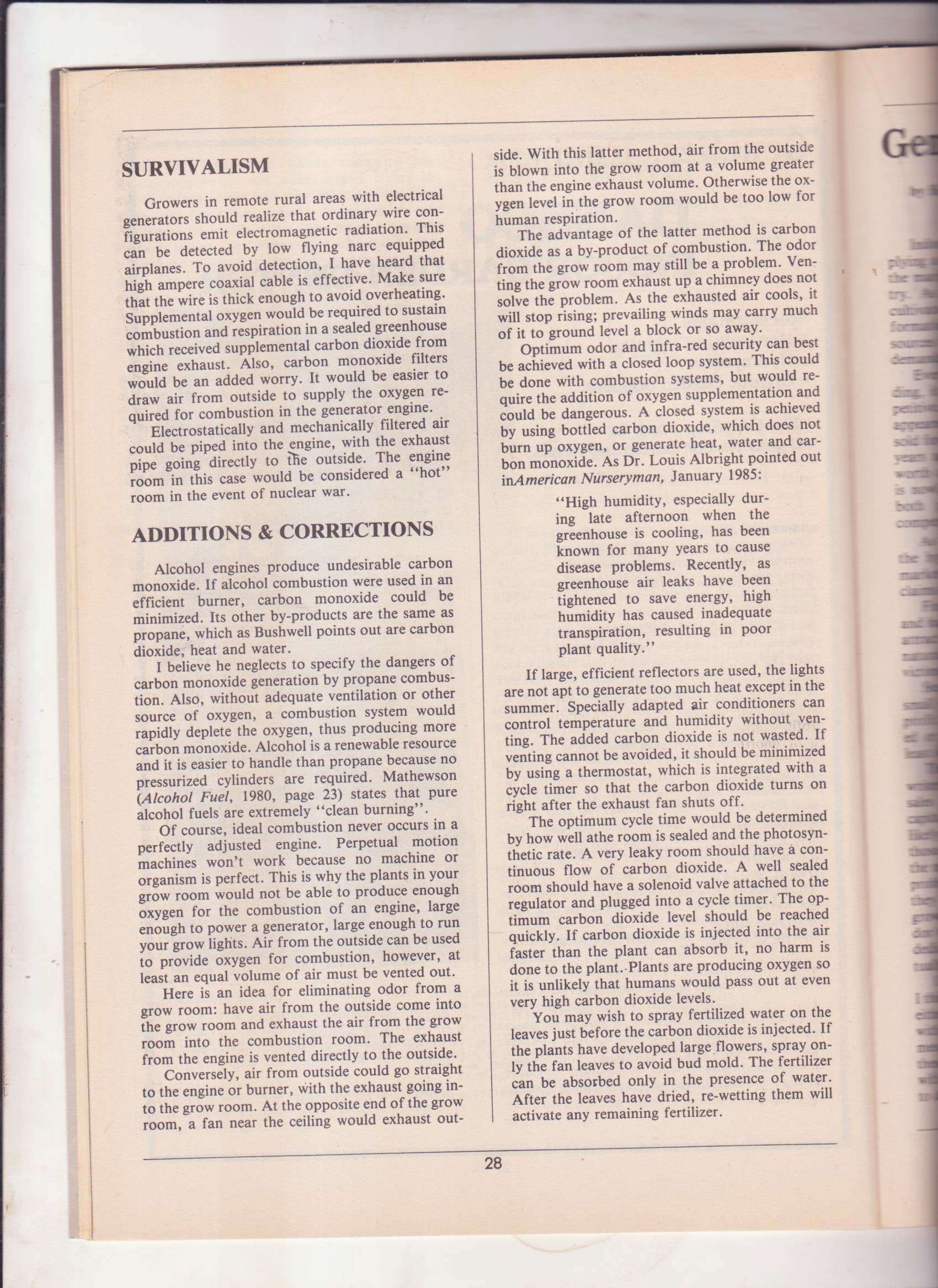 The strain of the month: strawberry cough