In my column in the last issue (Vol.5 No.3), I stated that most plant varieties require some blue light at all stages. However, it is more accurate to say that most plant varieties could benefit from some blue light at all stages. Red light is the most efficient for growing and blooming, however the absence of blue light may result in excessive stem elongation and/or lessened plant quality. I usually recommend Luxor Natural Blue fluorescent for seedlings and rooting cuttings, halide for growing, and adding sodium light to halide during blooming.

1 have recommended 12-45-10 for blooming. However, because of the relatively high nitrogen content of this NPK, I now recommend it only for early bloom. 5-40-17 is good for late bloom, although I would prefer a potassium content lower than 17<Vo (for increased quality).

I recommend foliar feeding with fish emulsion for cuttings. This should only be done after the cuttings have rooted and the transparent covering removed. Foliar feeding tends to enlarge leaf size, so you may wish to foliar spray for only the first few days of growth. On the same page, I discuss the effects of hormones such as gibberellic acid (for inducing male flowers) and I-AAA (for inducing female flowers). However, these are experimental applications and results may vary according to environment and heredity.

The Optimarc is a halide bulb made in West Germany, designed to be powered by a high pressure sodium ballast. Unlike most other HID lights, the optimarc bulb is less electrically efficient at higher wattages. The 400 watt bulb, vertically oriented in a vertically radiating four foot paraboloid hood, would make a good stand-alone light. The 250 watt optimarc, vertically oriented in a horizontally radiating paraboloid reflector, would make an excellent side light to supplement High Pressure Sodium light.

Although the Optimarc is less efficient electrically (than HPS), its unique color spectrum makes for good growth and excellent quality. One experimenter said that before, his plants appeared to be lightly dusted during the bloom stage. With the Optimarc, they appeared to have been dipped in gold dust. For some clues as to this interesting performance, see the following spectral charts:

Above spectral distribution charts show average amount of light generated in each color band by a light source. 100 CRI and 5500K color temperature are officially specified for natural light — represented on charts by white line Notice how much closer Optimarc chart is to white line than is High Pressure Sodium. In actual practice, the difference is equally obvious, as photographs on this page illustrate Optimarc's nearly-perfect white light is ideal for low-bay and medium-bay use.

You will note the presence of abundant red light (675 nm). This is somewhat offset by the harmful infrared, which is present in larger amounts in the higher wattage bulbs. The infrared is needed only in small amounts, to aid in leaf transpiration. An excessive amount would subtract from the red effect and contribute to stem elongation. The blue and violet regions are considerably strengthened benefiting the plant by causing shorter internode length. While it is not shown on the above charts, there is a more complete chart showing the Optimarc radiating throughout most of the UV-B region; this kind of stress apparently increases plant quality. See below:

An underground economy is an inevitable outgrowth of state repressions of victimless economic activity. One of its effects is to undermine the economic base of the state. This in turn  may cause the state to react with even more repressive measures, resulting in increased underground profits. The present situation may be regarded as an escalating cycle cer certainly challenging the ingenuity of those involved.

There may be an attempt to flush out large sums of underground money by establishing a new form of paper money and requiring the old to be exchanged for new. At the time of exchange, questions may be asked as to the identity of the person bringing in the old money and where it came from. For public relations reasons, such a program of new currency would be presented as a simple change in design, with the reporting requirements slipped in later on. To make an analogy: those who want to reinstitute the draft realize it would re a radical and politically unpalatable move. Hence, the current policy of draft registration without re draft.

The Federal Bureau of Engraving and Printing has recently floated a trial balloon by publicizing the results of studies favoring currency re-design. One proposal recommends a multi-color currency for the stated purpose of making counterfeiting more difficult. According to studies, advances in reprographic technology expected by the late 1980’s or so may make counterfeiting much easier.

According to the Treasury department study, demonetization is unlikely, has never happened in the U.S., and would require the approval of Congress. (Demonetization means to withdraw from use as currency). However, as long as the old bills are legal tender, the same possibilities for counterfeiting would still exist. In fact, demonetization has occurred in the U.S., the most famous case being when F.D.R. succeeded in making private gold possession illegal. According to the same study, the Secretary of the Treasury can re-design the currency by his own executive authority.

The governments of Great Britain, Canada, Australia and the U.S. have formed a joint study group to share monetary data. So, it may be instructive to learn from the British example. England has a new one pound copper coin to replace their one pound note (which is no longer being printed). People are supposed to turn in their old notes for the new coins. After a certain deadline, the old notes will no longer be legal tender (which means a shopkeeper does not have to accept them).

Even in the absence of formal reporting requirements, I suspect that an individual attempting to exchange a big wad of $100 bills may raise a few eyebrows at the bank.

Government investigators could then be tipped off. Although it may not appear important at present, if you soon adopt the practice of using precious metal coins for transactions, you won’t be caught holding a large amount of paper should such a re-design occur.

There are other reasons for investing in precious metals. Coins don’t mold when you bury them. Precious metals are an excellent hedge against inflation. If interest rates drop and there is increased inflation, the dollar price of silver, gold and platinum may skyrocket. Demonetization would also contribute to this effect. At the present time, the downside risk for silver (for example) is probably minimal.

Coins are a safer investment than bullion. Under crisis conditions, you may not be able to have your metal bars analyzed. Coins are more recognizable and easier to use as a medium of exchange. Precious metal coins are milled, which means they have a series of small ridges on their edge. This is done to discourage people from shaving scraps from coins, and then passing the coins at full value. If a non-precious metal coin is milled, this is done merely as a psychological ploy.

Gold coins are sometimes considered a morally questionable investment because the South African and Russian governments are the two main suppliers. However, governments are not the only minters of precious metal coins. Some of the larger domestic refiners mint their own coins. Other companies buy the raw metal and mint coins. Some good designs are the Bill of Rights series, and the famous economist series. I think it is counter-productive in the long run for privately minted coins to imitate the design of government coins. Governments have a long and sordid history of ruining currencies. 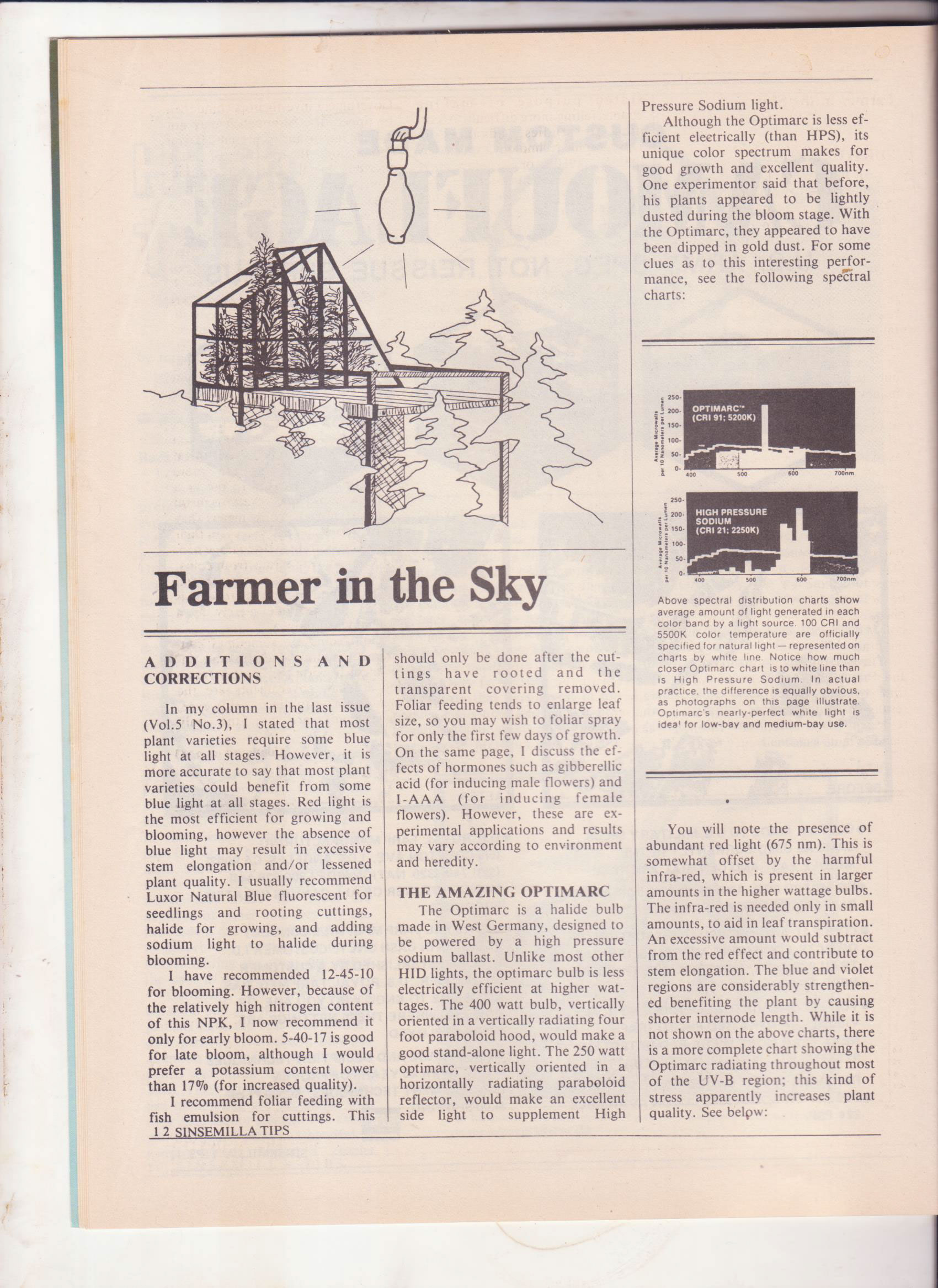 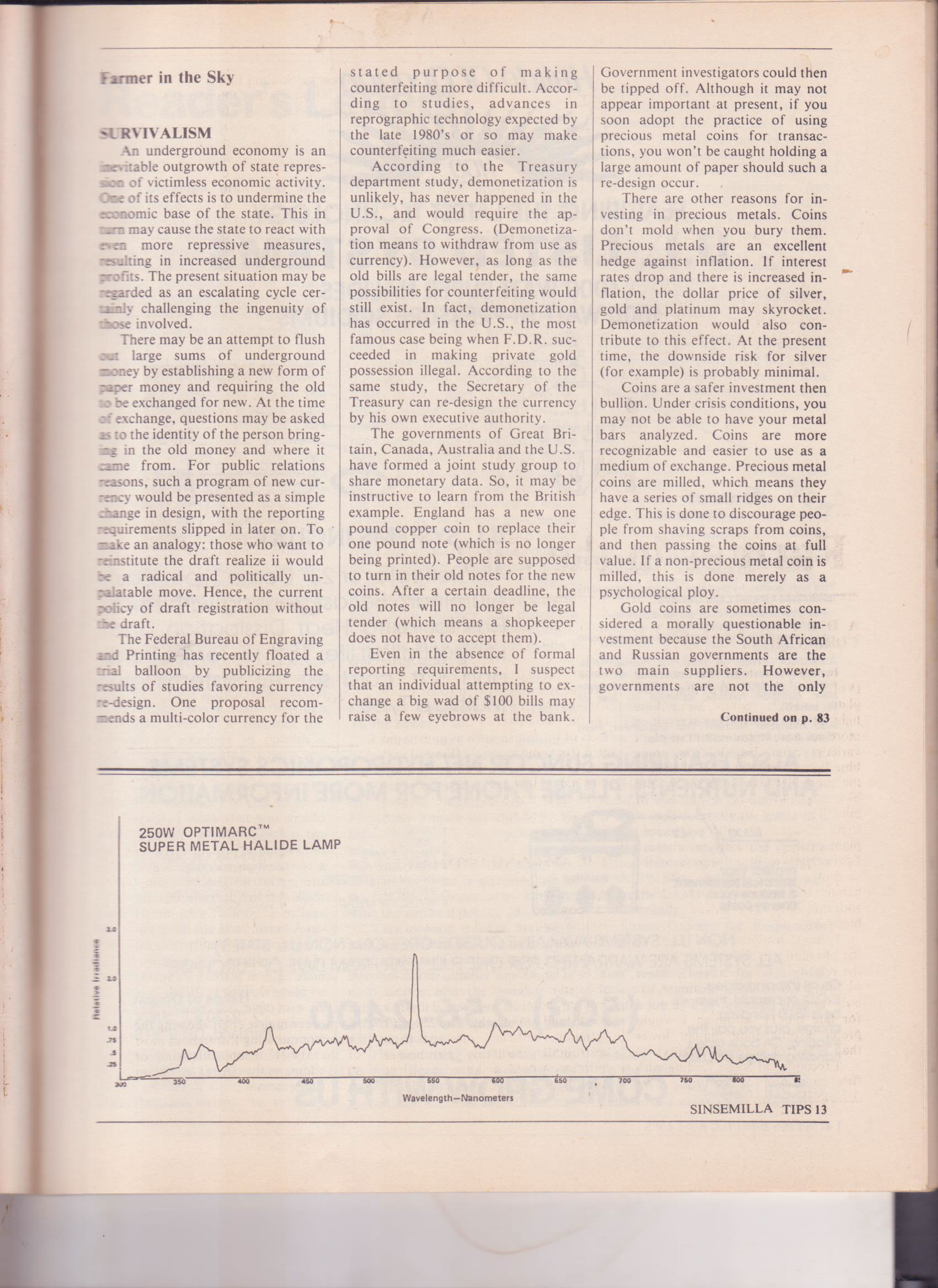