The Halide arc tube emits a lot of Ultra- Violet (UV) light; although the outer glass shell of the bulb absorbs most of the UV, converting it to heat. When a phosphor coating is applied to the inside of the bulb, the light source is diffusedâ€”i.e., the light appears to be radiating from the outer shell.

Diffused lighting is easier on the eyes, and preferred by plants because it producesmore uniform lighting.

To test this phenomenon, compare the shadow which is cast by a clear bulb (very distinct black and white) and by a phosphor bulb (diffused).The phosphor bulb also causes a red-shift, which is beneficial because the plantâ€™s sensitivity curve has its peak in the red at 675 nanometers. There is still ample blue light produced by the phosphor halide bulb to prevent excessive stem elongation. With the phosphor bulb, the blind spot underneath is filled up.

The phosphor coating does dissipate some usable light as heat, but it prevents the dissipation of much UV light into heat by red-shifting most of the UV light thus allowing it to pass through the outer shell. This explains why the initial lumens rating for the two bulbs are the same: 125,000 lumens for the Sylvania or Westinghouse MS1000 clear or phosphor. The average lumens for the phosphor bulb is slightly less because age causes a further red-shift, and "lumens" represents a bell-shaped curve centered at green. Lumens is not a very good measure to use when evaluating bulbs for plant growth. The following charts are for comparison:

An outfit from California called Creative Electronic Products, has recently come out with "the first light source to manipulate the phytochrome receptor." It is called the Tech-3 Hybrid, and looks like a flying saucer. They claim that "plants respond to a narrow band of frequency at 450-500 nanometers (blue), 675-700 nm (red), respectively. Any light that is not at these frequencies is a waste of your money." Disregarding the poor grammar, these statements are not factually accurate. As can be seen from the previous chart, plants respond to a wide range of frequencies. It is true that a light source emitting at 675 nm, with enough blue to prevent excessive elongation, would â€˜ be the theoretical ideal. However, a bulb has yet to be developed which can deliver light at 675 nm efficiently.

To quote from Artificial Light In Horticulture by Philips, "...the overall efficiency of a lamp is also determined by the proportion of electrical energy it converts into radiant energy. In practice, it often turns out that a gain in photosynthetic action is offset by a loss in the efficiency of the energy; conversion of the lamp itself...as the plant sensitivity curve shows, the action of photosynthesis is spread over the entire visible spectrum...The wavelengths of the bands of the high pressure sodium spectrum in which most of the energy is concentrated coincide fairly well with the maxima in the plant sensitivity curve...The metal halide lamp's very high radiant flux means that it is ideal for use in those applications calling for high irradiation levelsâ€”e.g. Photosynthesis."

The User's Manual for the Tech-3 Hybrid states: "With incandescent, Xenon, Halide, Low & High Pressure Sodium, etc. lamps, a filament (wound wire resistor) heats up when electricity is sent through it. The real product of these lamps is heat, and light photons are a byproduct."

Actually, Halide and Sodium bulbs generate light by vaporized metals in an arc tube. Their Model-2 also has a 500 watt halogen bulb, which by their own admission generates a lot of heat and is therefore less efficient.

The Tech-3 has not yet been tested by the "U.S. Dept, of Agriculture Plant Light Laboratories." According to Dr. Vanderwoud of the U.S.D.A. Light and Plant Growth Lab, a Tech-3 unit was only recently received, appears to be "frivolous", and is most certainly not endorsed by the lab, and furthermore, the lab has not produced any article titled "Spectral Characteristics of Visible Radiation Incident Upon The Surface of The Earth."

In fact, the "Tech-3 Hybrid" has not been evaluated in any scientific literature, despite implications by the producers to the contrary. The device consists of a small 21 incandescent bulb with blue glass, and six LEDs (light emitting diodes). LEDs are commonly used in electronics as indicator lights. Their spectrum has a peak at 730 nm or infrared, which is antagonistic toward the beneficial red. But even if the spectrum were primarily red, the quantity of light would hardly be sufficient to grow plants over a large area. Back to the drawing board.

Most track lighting systems on the market have not been in use long enough to determine their safety and reliability. There is no provision (that I have been able to find) in UL#1572 or the National Electrical Code for High Intensity Discharge track lighting. The purpose of the product is to spread over a large area the light from a small reflector. Track lighting would probably work well in a greenhouse, where a small reflector is desired to avoid blocking the sun.

One version consists of a wall-mounted arm, approximately five feet long, which is rapidly moving back and forth in a semicircular arc. (I understand a newer multilight version is now on the market, but I will evaluate it in a later issue once I have a chance to examine it.) In a totally enclosed growroom the single light version in particular would have several disadvantages:

For totally enclosed grow rooms, I recommend large reflectors for several reasons. They consume no electricity. They are safer. They come all the way to the bottom of the bulb without creating a narrow beam effect. Deep reflectors are preferable because they contain the light within the cubic area where the plants are located. More uniform coverage of light could be achieved by moving the plants instead of the light, through the use of oscillating fans. Phosphor coated bulbs would also increase uniformity of light coverage.

A paraboloid is about four times as wide as it is deep, with the sharpness of angle increasing geometrically from the center. The reflector should come all the way to the bottom of the bulb, in order to contain the light in the cubic area occupied by the plants. Because of the vertical length of the 1000 watt bulb, a deep parabolic reflector must of necessity be approximately six feet wide.

Some track lighting systems have other problems as well. One moves to slowly from one end to another (40 minutes), resulting in less than optimum light on the plants. Another one rotates two lights at opposite ends of a bar, so most of the light goes to the outer edges of the room.

Greater gains in efficiency can be had with large paraboloid reflectors, which are probably incompatible with existing track lighting systems. Using a less efficient system, which has been tested only with small reflectors, is like going from New York to Los Angeles via China! 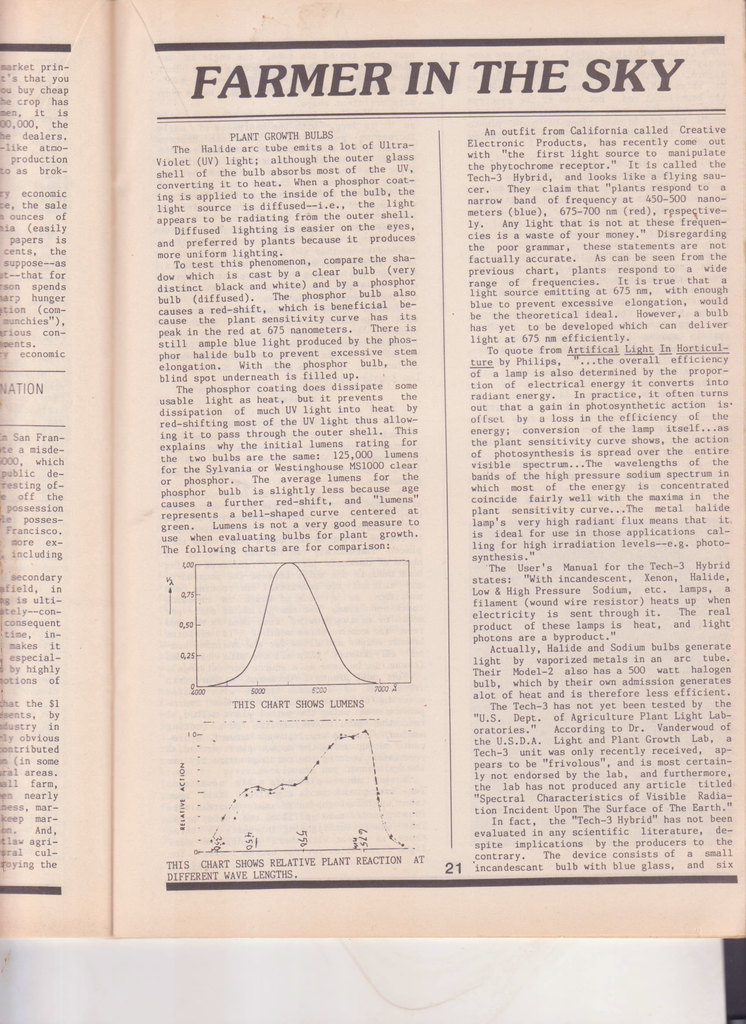 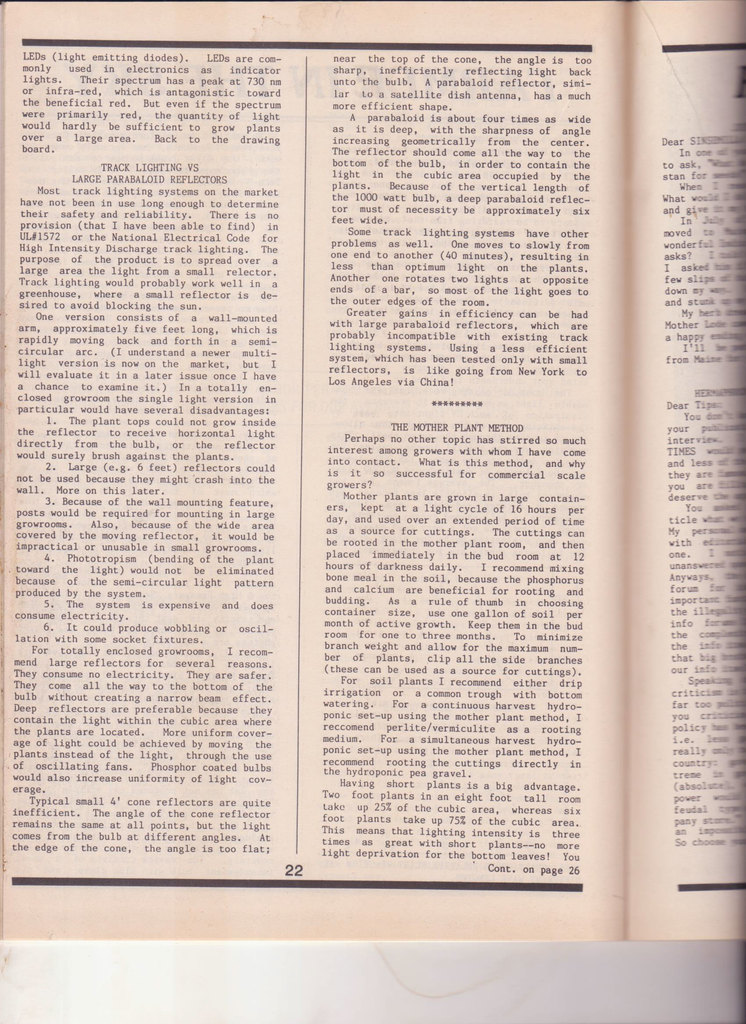 Strain of the month: cinex

Strain of the month: jilly bean