How Cannabis Affects the Mind

How weed affects the adult brain.

There is no scientific proof that marijuana causes permanent damage to the adult brain. However, excessive use has shown a reduction in IQ, slower reaction time, and a change in temperament (consumers are more lackadaisical). Studies have shown that once an adult stops smoking for a long period, after a month or so, their IQ returns to normal and their body's normal reaction time returns to normal. Also, marijuana does cause temporary short term memory loss, but it does not cause Alzheimerâ€™s. On the contrary, weed is currently being studied as a cure to one of the most depressing symptoms that plagues thousands of Americans (and people around the world) every year.

According to Staci Gruber, PhD, a neuroscientist and director of the Cognitive and Clinical Neuroimaging Core and the Marijuana Investigations for Neuroscientific Discovery (MIND) says that, "the brain is still under construction." A study has shown that young adults (average age of 13) who start consuming cannabis in large quantities suffer from permanent brain damage. Unlike adults, young adolescent brains have not yet finished developing. Their brains are continuing to create several folds as they mature, and unfortunately, marijuana is too invasive and impedes the creation of brain folds and gray matter. Brain folds are responsible for the minds IQ, and adults are supposed to have just enough to think critically and retain information.

Marijuana does not affect the fetus lungs, heart or any vital organ growth except for the brain. Brain folds are developing, and cannabis is too harmful for the unborn babyâ€™s mind. Most mothers who smoke cannabis during pregnancy lower the IQ of their child. The child may look normal when they are born, but when it comes time to teach them life lessons like math, reading, science and social skills, they wonâ€™t be able to â€œget itâ€ right away. Their critical thinking skills will also take longer to develop, and they will struggle for the rest of their lives because the damage is permanent.

But isnâ€™t the research on smoking limited?

It used to be limited; but studies from, What to Expect, and, DrugAbuse.com, has shown that consuming marijuana while pregnant will affect the fetusâ€™ brain in a negative fashion. Also, according to, The Bulletin, many pregnant women who consume cannabis take it because they have ailments that are usual during pregnancy like not being able to keep food down and for pain. But, there are other medicines that are available for mothers to take that donâ€™t hurt the fetus. My wife and I love cannabis and she stopped smoking during her pregnancy; she takes Vitamin B12 that helps fight nausea, and it helps her keep the food down. Thatâ€™s not to say that vitamin B12 is a cure all, but she would rather take medicine assigned by her doctor than risk hurting our unborn child.

So far, fully developed adults who consume large amounts of cannabis suffer no permanent brain damage. However, scientific studies have not been able to follow long term users over extended periods of time (a lifetime). What studies have shown is that adults who have smoked or eaten marijuana for over ten years, and then stopped for over a month have regained their normal temperaments, reaction time and IQ levels. Marijuana does not cause permanent brain damage to the fully developed brain, even though it does cause temporary short term memory loss that is generally associated with THC

How does cannabis affect children with autism?

Autism is a disorder that impacts brain development. Communication problems, social interactions problems and hurtful behavior are symptoms associated with autism. According to the autism support network, there are no clinical studies on cannabis and autism, but there is growing support from doctors and parents to treat symptoms of autism with cannabis. It is also stated that children receiving cannabis treatments is controversial, the research does not exist because medical establishments fear about testing cannabis on children. However, there is a growing number of anecdotal evidence that marijuana is making children with autism happier and healthier. According to a strict family with a strong police background, Hester-Perez' family was being heavily criticized for giving their autistic child cannabis and released this statement, "Until youâ€™ve seen where a child was before cannabis, how much progress theyâ€™ve made after cannabis, and how much their lives can improve, who is anyone to pass judgment?â€

In Yahoo News, Kalel Santiago, 9, who has autism, spoke his first words shortly after starting hemp-oil treatments. Kalel's struggles started when he was 10 months old, he was diagnosed with the childhood cancer, neuroblastoma, and severe nonverbal autism. Kalel would not speak, slapped his hands and walked on his toes. After he was 3 years old and cancer free, his parents gave him a tiny sample of cannabis CBD spray; he started speaking in 2 days. â€œHe surprised us in school by saying the vowels, A-E-I-O-U. It was the first time ever,â€ Abiel [Kalel's father] says. â€œYou canâ€™t imagine the emotion we had, hearing Kalelâ€™s voice for the first time. It was amazing."

According to, Abilities, "Cannabinoids have been found to have antioxidant properties, unrelated to NMDA receptor antagonism. This new-found property makes cannabinoids useful in the treatment and prophylaxis of wide variety of oxidation associated diseases, such as ischemic, age-related, inflammatory and autoimmune diseases. The cannabinoids are found to have particular application as neuroprotectants, for example in limiting neurological damage following ischemic insults, such as stroke and trauma, or in the treatment of neurodegenerative diseases, such as Alzheimer's disease, Parkinson's disease and HIV dementia. Non Psychoactive cannabinoids, such as cannabidiol, are particularly advantageous to use because they avoid toxicity that is encountered with psychoactive cannabinoids at high doses useful in the method of the present invention."

Cannabis can only be sold to consumers 21 years and older?

In every state in the United States, cannabis consumption in every form is only allowed for people 21 years and over. Marijuana is only allowed to be sold in dispensaries and they will only sell to people 21 years and older. There are very few acceptations to this rule, ask your local dispensary if they sell to patients under 21 if you have an explicit doctor note for a qualifying condition. Every state has different rules for who they sell cannabis too and if there is an exception to that rule. 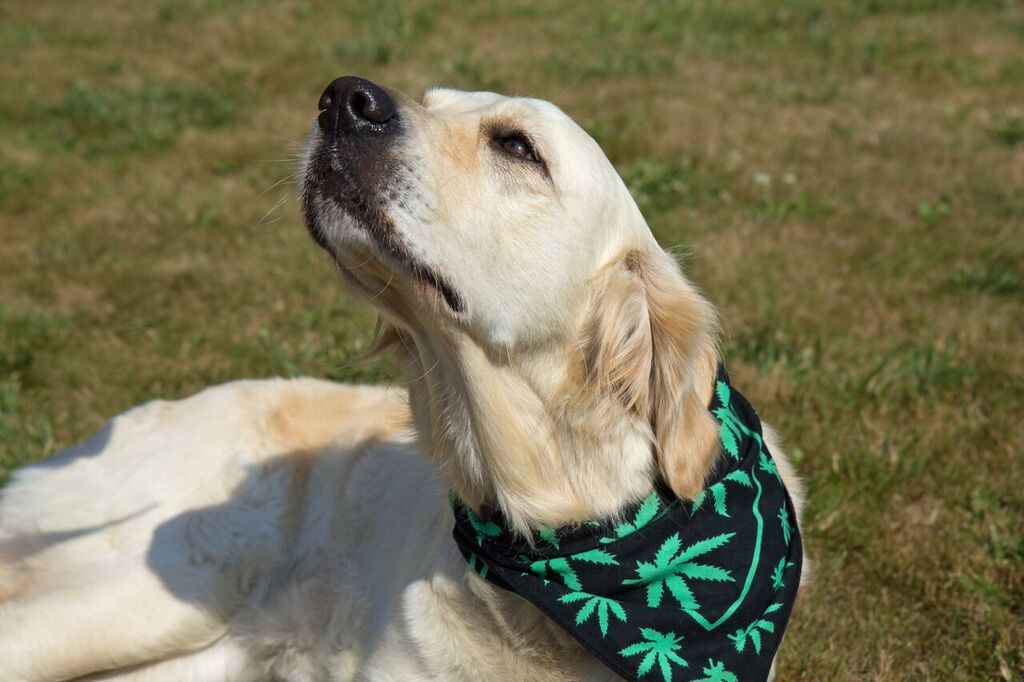 It is not recommended to give marijuana to animals, unless specifically given permission by a qualified vet. Marijuana effects the brain of all animals in a different manner than human adult brains, and it can be a hazard to their health. There are currently no laws that forbid owners to give their animals weed. But, giving pets recreational medicine (or any medicine that is not specifically labeled for a pet) can be seen as animal abuse and you could subject yourself to fines, loss of pet ownership and even jail time. It is advised to call your vet and ask before giving your pet, of any kind, marijuana.

Cannabis affects a dogâ€™s brain in a negative manner. It is not advised to give dogs marijuana. Cannafo has posted a video called, Can Weed Kill Your Dog, where a veterinary professional explains the negative side effects of giving cannabis to dogs. Per, PetPoisonHelpline.com, the negative effects of giving a dog or cat marijuana products are severe depression, walking drunk, lethargy, coma, low heart rate and low blood pressure, respiratory depression, dilated pupils, hyperactivity and seizures. The Huffington Post wrote an article that says Marijuana causes neurologic toxicity, and it is not the same "high" experience that humans experience.

Please donâ€™t feed the bears, deer, raccoons or any other wildlife marijuana. It is dangerous because there is no current scientific study on the effects of cannabis on their brain. Normal wild animals are unpredictable, and giving them buds to eat or food tainted with marijuana could create a dangerous situation for yourself and those around you. Many states have strict laws about what people can feed the animals. If you need to know, check your local laws to know if youâ€™ll get in trouble by feeding ducks, for example, cannabis bread.